Universal basic income. Myth 4: There’s no money for it

Hello! Today we are going to talk about the fourth myth about the idea of universal basic income. It has been hotly debated in the press and it sounds like there is no money for it.

This issue is the main argument of the opponents of universal basic income. It is true that the amount of money required to implement this project is impressive, but at the same time, there are ways proposed to resolve this issue.

The first and main source for financing universal basic income, which I have already mentioned, is to cancel all of the current social benefits and all of the huge bureaucratic apparatus that administers them.

Today, the number of all kinds of benefits and entitlements runs into the dozens, i.e. these include pensions, grants, unemployment benefits, disability benefits, and all sorts of benefits for payment of housing and communal services. This is compensation for the cost of rent, i.e. accommodation, payment for housing, and it’s transferred directly to the landlord.

Can you imagine how many documents you have to collect and to prove them? I’m not even talking about medical commissions and other activities that are necessary to annually confirm the right to all sorts of benefits.

All of this is proposed to be cancelled and the funds freed up to just the payment of a universal basic income to citizens.

Today more than half of the officials, the entire bureaucratic apparatus, is engaged in the administration of all sorts of benefits. The amounts are actually huge.

Instead, we would need to write just one single program, a computer program that will make monthly payments based on its calculations to each person. And all the number of documents that are collected by officials now would be replaced by just one date of our birth, and that is known to the state, because it is the state that issues our birth certificate. Even if the amount of the UBI is differentiated according to age, the program will also easily be able to calculate it on the basis of the date of our birth.

It is very simple. I suggest we roughly calculate whether these sources are enough for the financing of the UBI in Russia.

Let’s take only certain items of the expenditure part of the budget.

Some items of expenditures of the budget of the Russian Federation in the social sphere for 2020 in thousands of rubles:

If we divide the total sum of expenses by the number of inhabitants of the country, we will get the potential amount of UBI per one person. The amount per one person is 68,000

Please note, the calculation takes into account only some items of expenditures in the social sphere.

Scholarships and other benefits included in the expenditures of other agencies were not taken into account. Then the calculated amount of the UBI will be even larger.

In addition, there is another source. Everyone knows, well everyone – it’s sociologists and economists know, that low-income unemployed people increase the burden on health care and law enforcement. This is, too, no small savings in the current consumer society, I’m not even talking about the Creative Society, which we aspire to, well at least I aspire to – me and like-minded people, and many people on the planet.

In such a society, in principle, the need for law-enforcement agencies would be minimized, and accordingly this would free up a lot of money, which could also be used to fund the UBI.

No matter how large the amount freed up, even supporters of UBI admit that additional sources would be needed to fund this project.

I have read the economic literature, read quite a few sources, and, unfortunately, all of the authors cite the same possible sources of funding for universal basic income. Basically, everyone is copying off each other.

So economists suggest the following sources for funding of the universal basic income:

– first one is natural rents

– the third is the issuance of money – specifically, can you imagine, to finance UBI.

You know, I’m not even going to list the following sources of funding, because they get more and more absurd. These proposed measures certainly scare people with good reason. Why would you want to change a thing for a thing? I don’t agree with either any of them. And that’s why in 2016 the Swiss rejected the introduction of UBI in a referendum because they didn’t see the point. Why should they raise taxes in order to get a guaranteed amount of aid from the state? I probably would have made the same decision.

You know, I don’t really see the point of talking about the need for UBI in one or more countries at all. It’s a good place to start, though. It can and should be done. But the point is that this would create conditions for capital to exploit the withdrawal and accumulation of financial resources outside of these countries, which means we would again be faced with a redistribution of resources.

I see universal basic income as providing the material base of man in a Creative society, although it can and should be led gradually and in stages.

By the way, if this is the first time you have heard the phrase Creative Society, I recommend you to watch the corresponding video on YouTube.

So, in the Creative Society, the society of all earthlings with a single planned economy on a global scale with nominal borders between countries, everything becomes real. When we are united in our human impulse to make this planet and society as a whole, I mean united all earthlings, all inhabitants of the planet, when we function as one economic system, I’m sorry, we have no need to go to war with each other.

All our work, all our actions are coordinated and function in harmony. In this connection we no longer have such a huge layer of expenditures unnecessary in the Creative society as the arms race. That is, we no longer finance weapons and other stuff aimed at the destruction or deterioration of conditions for human functioning.

Similarly, there is no need for customs. Why, if we nominally establish borders between countries, but in general we act as part of a single world economy. Can you imagine what sums of money are freed up, which could just be spent on the payment of the UBI?

Individual items of expenditures of the budget of the Russian Federation in the area of defense and customs services for 2020 in thousands of rubles:

Since the Customs Service is the agency that generates the revenue part of the budget of the country, it does not seem feasible to accept the costs of its upkeep without considering the revenues. We exclude this item from the calculations.

Separate items of expenditures of the budget of the Russian Federation in the law enforcement sector for 2020 in thousands of rubles:

Taking into account previously estimated social and defense expenditures, the total amount per person is 105,900.00 rubles.

Please note: the expenses for the maintenance of the Ministry of Internal Affairs, the judicial system and other bodies which should be minimized in the Creative society were not taken into account. Taking into account these expenses, the sum per one person would be even higher.

Moreover, in the Creative Society, all conditions are created so that the prices of those goods and services which we consume now would be many times lower, not by percents, but many times lower.

I already talked about this in the video “How to work four hours a day, four days a week.” I won’t repeat it, but just briefly list these points, which will lead to lower prices.

The first is the introduction of a unified planned economy, that is, when we will not produce all the unnecessary goods that are being produced now.

This is the abandonment of advertising, because it is not necessary in the Creative society. Only in the consumer society we are forced to buy unnecessary goods. And funds for advertising are part of the cost of production and constitute a substantial part of it.

The next point that will reduce the cost of goods is the use of an inexhaustible free source of energy and the abandonment of hydrocarbons, i.e., oil and gas which we now use. This, too, will substantially reduce the cost of our products.

And of course one of the points is the use of robot and machine labor, all of which will cause the prices of goods and services to drop many times over, which means we will no longer need as much money to provide a decent life for us.

That is, the size of the UBI will increase substantially, while funds from saving on the bureaucracy on customs and armaments will be substantially freed up.

In general, there are funds and more than enough of them, just they are misallocated and spent on all sorts of nonsense inherent in the consumer society, from customs to weapons and advertising.

But they could be redirected toward what is most valuable in the Creative society: people and their lives. The introduction of the universal basic income will lead to the restoration of social justice and social equality already now in the consumer society, and even more so in the Creative Society, in which every person should live comfortably. 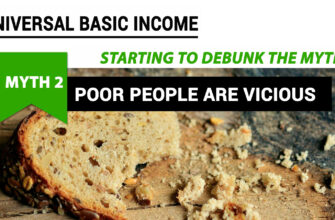 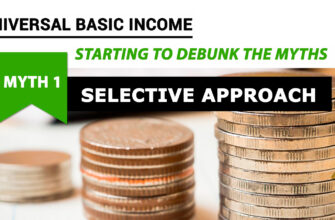